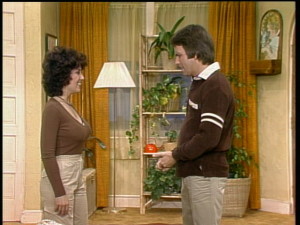 The character of Cindy Snow (Jenilee Harrison) continued to appear in the last set of opening credits, even after her character exited the show. She is briefly seen entering the zoo with the rest of the group.

Don Knotts served in the United States Army during World War II. He was not, as urban legend has it, a drill instructor for the Marine Corp. on Parris Island, but spent most of his time entertaining the troops.

Priscilla Barnes got her first real break in the mid 1970’s when Bob Hope hired her to accompany him on his trips to entertain military troops.

Suzanne Somers’ beachfront home in Malibu, California was burned to the ground by a wildfire in January 2007.

In 2004, Paul Hennessy, the character played by John Ritter in his last television series, 8 Simple Rules, was ranked at #48 in TV Guide’s list of the “50 Greatest TV Dads of All Time”.

Jenilee Harrison has been married to Bruce Oppenheim since 1993. Oppenheim was formerly married to actress Cybill Shepherd.

The character of Larry Dallas (Richard Kline) was originally supposed to appear in only one episode. Thanks to Kline’s chemistry with Ritter, the producers made him a recurring character and later a member of the cast.

Norman Fell was married three times and had three children, including an adopted baby boy named Kasey, who was later diagnosed with cerebral palsy.