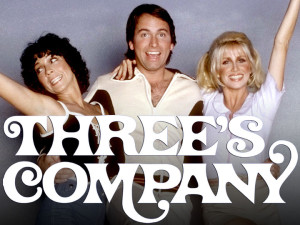 This series follows three single roommates living together in an apartment in Santa Monica, California.

Jack Tripper (John Ritter), Chrissy Snow (Suzanne Somers) and Janet Wood (Joyce DeWitt) are good – and platonic – friends. The landlord of the apartment building, Stanley Roper (Norman Fell), has been told that Jack is gay, and would not have let him move in with the girls if he thought otherwise. His wife, Helen Roper (Audra Lindley), knows the truth but keeps it to herself. 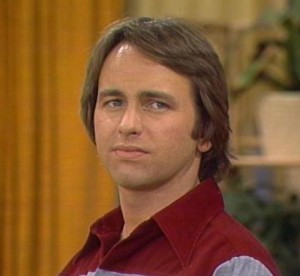 Jack Tripper (John Ritter) – Former Navy man Jack is training to become a chef. He met Janet and Chrissy after crashing a party they had thrown the night before and then passed out in their shower, where they discover him the next morning. It turns out to be a lucky break – previously staying at the YMCA, Jack is invited to move into the apartment to replace the girls’ departing roommate. Little does he know that he’ll have to pretend to be gay, a cover story that Janet makes up on the spot to get her landlord, Mr. Roper, to agree to the arrangement. Jack is well known for being accident-prone, but despite this he has a real way with the ladies. He’s also a loyal friend and protective of his two roommates.