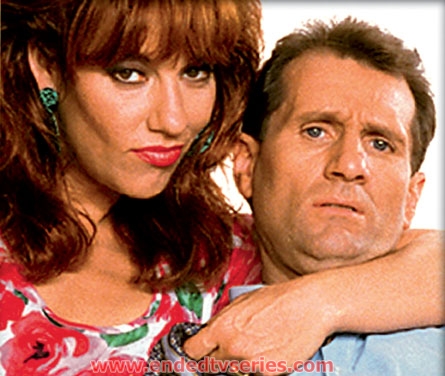 Married with Children follows the Bundy family, an unlucky family of four living in a fictional suburb of Chicago, Illinois. The classless Bundy family is poor, lazy, socially impaired.

Patriarch Al Bundy (Ed O’Neill) is a miserable women’s shoe salesman who feels disrespected and ignored both at work and at home. Unless they are asking for money, his family treats him with contempt and disdain. Al lives in the shadow of his glory days as a high school football player who once scored four touchdowns in one game, but his days are now spent working and commuting in a Dodge with almost one million miles on it. His only joys are reading “BigUns,” his favorite nudie magazine, visiting a local nudie bar, and watching a television show called “Psycho Dad.” He blames his lack of success and perpetual unhappiness on the “Bundy Curse” and often gets into fights while defending the “Bundy honor” or his daughter.

Peggy Bundy (Katey Sagal) is Al’s lazy, nagging wife who constantly bemoans her husband’s meager paycheck and disappointing moves in the bedroom. A housewife who refuses to cook or clean, Peggy rarely pays attention to her children—unless it’s to give them bad advice. Peggy spends her days watching television, spending Al’s money at the mall or on male strippers, and conspiring against her husband with yuppie neighbor Marcy Rhoades D’Arcy (Amanda Bearse).

Kelly Bundy (Christina Applegate) is the dim-witted, loose daughter of Peggy and Al Bundy. She sleeps with men she thinks she can use for money, status or gifts, but her boyfriends often end up getting beaten up by her father. Like her mother, Kelly has an affinity for spending Al’s money. She also enjoys teasing of her dorky brother, Bud (David Faustino), but comes to his defense when someone outside of the family tries to do the same.

The only son of Peggy and Al Bundy, Bud Bundy (David Faustino) is the first Bundy to attend college, however his luck stops there. Bud’s defining trait is his terrible luck with women and inability to get a girlfriend. Always desperate for female attention, he creates an alter ego, “Grandmaster B,” a rapper from New York who wears a backwards hat and dark sunglasses. Though his disgust for his family is apparent, Bud stands up for his sister against others.

Peggy’s best friend and next-door neighbor is Marcy Rhoades D’Arcy (Amanda Bearse. A Republican banker with a dark and aggressive sexual side, Marcy is also the founder of a group called “F.A.N.G.,” an acronym for Feminists Against Neanderthal Guys. She’s always thinking of ways to torture Al, who despises her.

Marcy’s first husband is Steve Rhoades (David Garrison). Despite the disapproval of his wife, Steve is easily influenced by Al and gets wrapped up in his antics. After tiring of Marcy’s controlling behavior, Steve leaves her to become a forest ranger at Yosemite National Park.

Jefferson D’Arcy (Ted McGinley) is Marcy’s young and handsome second husband, whom she marries after a drunk night at a bankers’ convention. The opposite of her yuppie first husband, Jefferson is a lazy, poor scam artist who only married Marcy for her money. Despite Marcy’s objections, Jefferson quickly befriends Al and the two spend their days making fun of her. 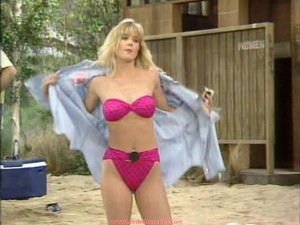 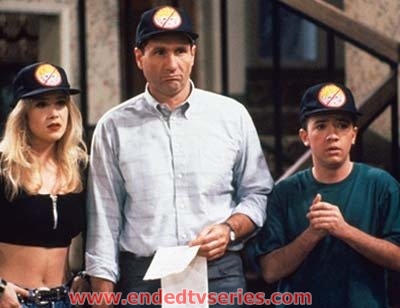 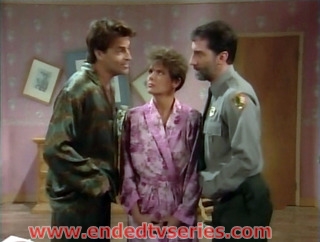 Roger Moore (former 007) was a friend of Katey Sagal’s father, the late director Boris Sagal, and once admitted Married with Children was a guilty pleasure of his.

Ed O’Neill played football in college and was signed by the Pittsburgh Steelers in 1969 but was cut from the team during training camp. Famous former Steeler Terry Bradshaw made two guest appearances on the series.

During the opening credits song, “Love and Marriage,” the shot of cars on the interstate is a scene from National Lampoon’s Vacation and the Griswold’s car, a green and brown Ford Crown Victoria station wagon, can be seen on the road.

The famous group “The Pussycat Dolls” got their start in Christina Applegate’s garage.

Ted McGinley worked as a lifeguard in high school and was captain of his college’s water polo team.

When Fox decided to cancel the series, the network didn’t inform any of the cast members.

After training for more than 22 years, Ed O’Neill received his black-belt in martial arts in 2007. In the documentary I Am Bruce Lee, he said receiving his black belt was the greatest achievement of his life, apart from his children.

During the first season of the show, David Faustino went to a very crowded mall wearing a t-shirt emblazoned with show’s logo. He was not recognized by a single person.

Katey Sagal started her career as a singer and songwriter. She was a back-up singer for Bob Dylan, Tanya Tucker, Olivia Newton-John and Etta James; she even performed as one of Bette Midler’s “Harlettes” in her innovative 1970’s stage shows. Katey also released two albums, Well in 1994 and Room in 2004, which include original music she wrote.

Married with Children was the first prime-time series to air on the Fox network.

The fountain pictured in the opening credits is Buckingham Fountain, located in downtown Chicago.

Christina Applegate broke her foot during the musical, Sweet Charity, her first Broadway job. She swayed the producers from shutting down the production and made her Broadway debut in April 2005 wearing special shoes. Because of her injuries, she can longer dance in strenuous roles.

David Garrison is best known for his role on Married with Children, but is mostly a theater actor. Although he enjoyed his role on the series, he asked to be released from his contract to return to the theater.

Until the television series Baywatch was cancelled in 2001, Married with Children was the longest-running show to never win an Emmy award.

David Faustino was arrested in 2007 for a misdemeanor possession of marijuana. He was also charged with disorderly intoxication, but that charge was later dropped.

Katey Sagal’s pregnancy was written into the Married with Children storyline. During her seventh month, she gave birth to a stillborn daughter following an emergency C-section. She later gave birth to a healthy son and daughter, though these pregnancies were not written into the show because of the earlier stillbirth. Years later with her third husband, Kurt Sutter, she had another healthy daughter via a surrogate.

Ed O’Neill’s star on the Hollywood Walk of Fame is directly in front of a shoe store.

Sam Kinison and Roseanne Barr were the first choices to play Al and Peggy Bundy.

Amanda Bearse came out as a lesbian in 1993. She was the first prime-time actress to “come-out.”

Christina Applegate’s first acting job was for Playtex baby bottles when she was only three months old. At five months old she appeared on the popular soap opera, Days of Our Lives with her mother, actress Nancy Lee Priddy.

The role of Sam Malone from the series Cheers almost went to Ed O’Neill. He was also considered for the part of Steven Keaton on Family Ties.

Ted McGinley was cast several popular television series, including Happy Days, Love Boat, Dynasty and Hope&Faith. He is known as the “Patron Saint of Jumping the Shark,” a term that that usually marks the beginning of a show’s decline. Although in the case of Married with Children, his presence on the show may have lengthened the series.

Christina Applegate married fellow actor Jonathan Schaech in 2001; they divorced in 2007. She then married musician Martyn LeNoble in 2010, and had a daughter one year later.

Ed O’Neill was the only actor in the series to appear on every episode.

In August of 2008, Christina Applegate was diagnosed with early stage breast cancer and had a double mastectomy. Though the cancer was only found in one breast, she was a carrier of the BRCA 1 mutation, an inherited genetic trait that is known to trigger breast cancer. Her mother, Nancy Priddy is also a breast cancer survivor. A participant in many breast cancer charity organizations, in 2009 Applegate founded “Right Action for Women,” a charitable foundation dedicated to breast cancer screening.

David Faustino owns a nightclub called “Balistyx,” which is the same name as his rap album.

Amanda Bearse directed around 30 episodes of Married with Children, as well as many other popular shows, including Reba, Dharma&Greg and Veronica’s Closet.

Peggy Bundy’s signature look was invented by Katey Sagal. When she auditioned for the role, she brought her own red bouffant wig and the producers liked the idea so much that they approved it for the show.

The producers were unsure if Ed O’Neill would be right for the role of Al Bundy because, historically, his roles were more dramatic. However, they immediately knew he understood both the character and the show after seeing his audition, where he opened the door to the Bundy house, let out a deep sigh and slumped his shoulders.

Ted McGinley took Brooke Shields to her senior prom in 1982.