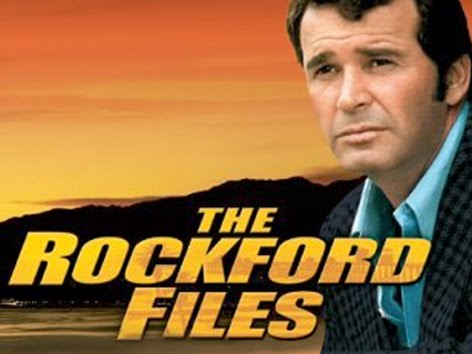 This series follows the adventures of private investigator Jim Rockford (James Garner). After spending five years in San Quentin Prison for armed robbery, a crime he didn’t commit, Jim is pardoned and turns to a career as a private detective. Now he lives and works in a broken-down mobile home near the ocean in Malibu, California.

Breaking the private detective mold, Jim does his best to avoid confrontation, often goes out unarmed and buys his clothes off the rack. He’s less concerned about making money than helping his clients, and does his best not to involve himself in open cases. He remains close to his former cellmate, Evelyn “Angel” Martin, (Stuart Margolin) despite Angel constantly getting Jim into trouble.

Jim has a close relationship with his father, Joseph Rockford (Noah Beery, Jr.), better known as “Rocky” to almost everyone, including his son. Rocky is a former “Seabee” of the United States Navy (Seabees undertook countless construction projects since their creation during World War II) as well as a semi-retired truck driver. Although often trying to persuade his son to find a safer line of work, Rocky can regularly be found helping him on cases and has even been known to require his son’s services himself. Jim’s mother is referred to only indirectly, the rare references suggesting that she died many years ago.

Any time that Jim finds himself in trouble, he calls on his friend and attorney, Elizabeth Davenport (Gretchen Corbett). Beth is an optimistic, strong person with a dogged nature and it is hinted that she and Rockford had a romantic relationship in the past. These days they are just friends, and later she leaves to write a book and begin a private practice of her own. Jim then turns to John “Coop” Cooper (Bo Hopkins), a disbarred attorney whose specialty is legal research. 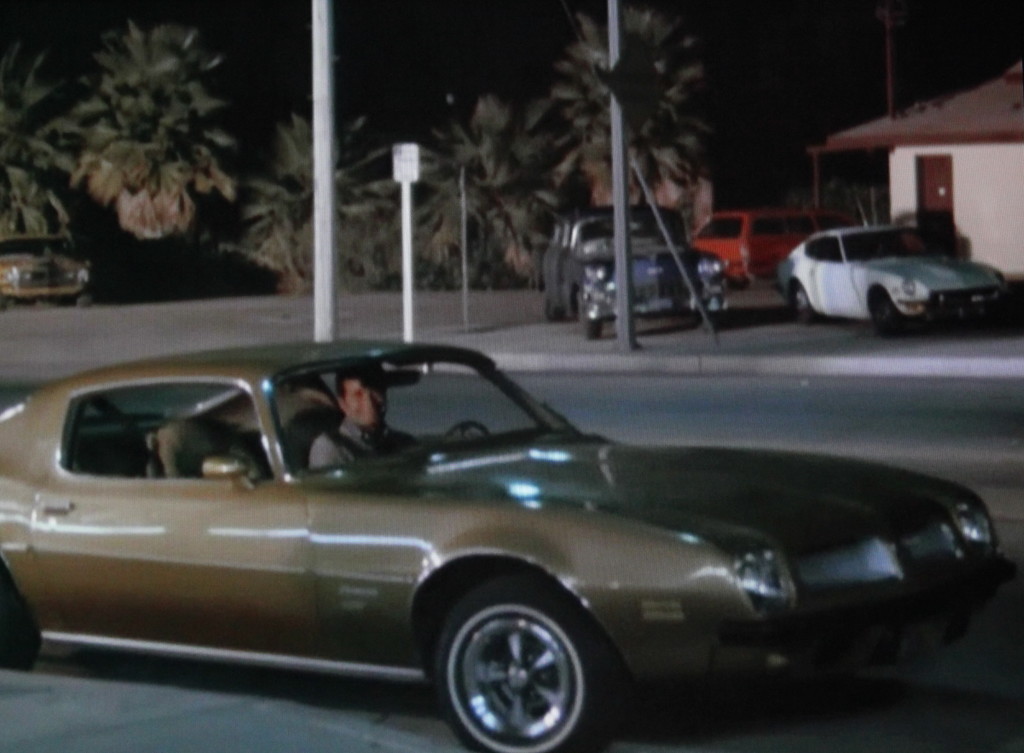 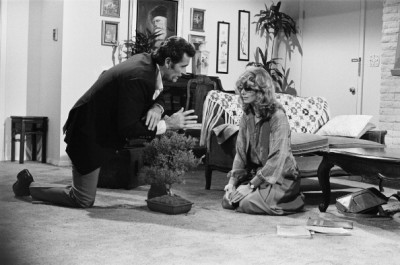 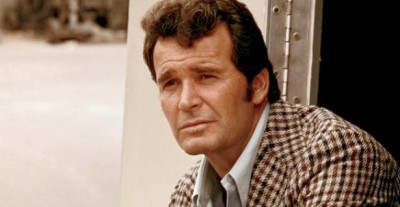 Jim Rockford’s telephone number is 555-2368, the same number shown in the in-movie ad for the Ghostbusters.

In the mid to late 80’s, James Garner was the TV and radio commercial spokesman for Mazda cars. Reportedly, each year he was given one Mazda vehicle of his choice, along with a cool $1 million. He chose one Mazda truck and three RX-7’s, and was known to drive them regularly.

James Garner (born James Scott Bumgarner) met his wife, Lois Fleishman Clarke, in 1956 and they married just two weeks later. In his words: “We went to dinner every night for 14 nights. I was just absolutely nuts about her.” Garner adopted Kim, Lois’s daughter from a previous marriage, and the couple also had a second daughter together, Greta (Gigi). Sadly, Lois died less than a month before their 58th wedding anniversary.

The father of Noah Beery, Jr. was Noah Beery, Sr., who was also an actor. His uncle, the Oscar-winning Wallace Beery, was the world’s highest-paid actor by 1932.

During what would be The Rockford Files’ last season, the show went into hiatus when James Garner’s doctors advised him to take time off for his back and knee trouble. He eventually decided not to return and the show was cancelled with ten episodes still left to film.

The reason that Garner had such problems with his back and knees was his insistence on performing most of his stunts himself, especially car chases and fist fights. He finally had both knees replaced in 2000. 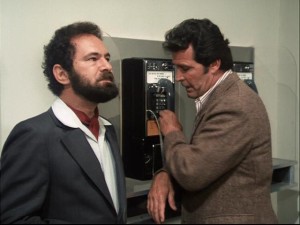 David Chase, who created the acclaimed HBO series The Sopranos, was also a writer/producer for The Rockford Files. During The Sopranos’ first season, there is a scene in a retirement home where the residents are watching television. Although the screen isn’t visible, the music playing is the theme to The Rockford Files.

Joe Santos (Dennis Becker) was in the business for a long time before getting his break in the movie The Panic in Needle Park. The star of the film was actor Al Pacino, who was a friend of Santos.

James Garner joined the Merchant Marines at the age of only 16, after dropping out of high school. During the Korean War he was wounded twice and received two Purple Hearts.

Noah Beery, Jr. was married twice and had three children, as well as three step-children.

The character of Rocky Rockford was ranked #45 in TV Guide’s list of the “50 Greatest TV Dads of All Time”.

In April 2006, a ten foot bronze statue was unveiled of James Garner as Bret Maverick, in his hometown of Norman, Oklahoma. There is also a street named after him there called James Garner Avenue.

The license plate to Jim Rockford’s car was 853-OKG. James Garner said in an interview that the number was created by his agent at the beginning of the show and represented the date of his first acting job (August 1953), the state he was from (Oklahoma), and his last name.

James Garner won an Emmy Award for his portrayal of Jim Rockford.

The series was created by Roy Huggins and Steven J. Cannell. Huggins was also the creator of the television series Maverick, which is where James Garner first became well-known. 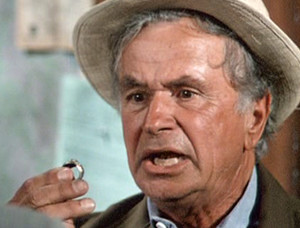 The theme music to the series was released as a single and went to #10 on the Hot Billboard 100. It stayed in the chart for sixteen weeks, and won the 1975 Grammy Award for Best Instrumental Arrangement.

James Garner says he learned a lot by watching the late actor John Ritter on the television series Three’s Company. He later joined 8 Simple Rules as a permanent cast member, the show that Ritter was starring in when he died.

James Garner’s mother died when he was only five years old. He lived with relatives for a few years and was later reunited with his father after his remarriage to a woman named Wilma. Garner said that he hated his stepmother, who beat him and his two brothers and forced him to wear a dress in public as punishment. When he was 14 years old, he got into a physical altercation with her, allegedly to keep her from killing him. The episode marked the end of his father’s marriage. His brother Jack once said, “She was a damn no-good woman”.

In 2010, David Shore wrote and produced a pilot for a remake of The Rockford Files for NBC, with actor Dermot Mulroney in the lead role but it was not picked up by the network. The lead was then re-cast with Peter Berg as Rockford, but the series has still not been made.

When he was just seven years old, Noah Beery, Jr. appeared with his father in the silent film The Mark of Zorro.

James Garner was one of a few celebrities to join Martin Luther King, Jr. in the 1963 “March on Washington for Jobs and Freedom”.

The “Jim Rockford turn-around” popularized by the show is an evasive driving technique taught to Secret Service agents that are driving for the President of the United States. 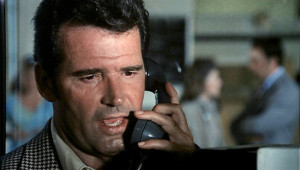 James Garner co-starred with Sally Field in the 1985 film Murphy’s Romance. Columbia Pictures were reluctant to make the film and wanted Marlon Brando to play the role of Murphy, but Sally Field and director Martin Ritt insisted on Garner. At the time, the studio was owned by the Coca-Cola Company, and a portion of the deal included both Field and Garner saying the word “Coke”, in addition to having Coke signs appear prominently throughout the movie. In a biography of James Garner, Sally Field said that her on-screen kiss with him in the movie was the best cinematic kiss she ever experienced.

Joe Santos had a recurring role in popular HBO drama The Sopranos as Consigliere Angelo Garepe.

At first, the character of Jim Rockford got a new model Firebird Esprit every year of the series, starting with the 1974 model. This apparently stopped in 1979 because James Garner did not like the restyled front end of that year’s model.

James Garner’s autobiography was published in 2011, and included the revelation that he had smoked marijuana since he was in his late teens.

Between 1994 and 1999 there were eight Rockford Files reunion TV movies. Most of the cast from the original show were reunited with the exception of Noah Beery, nicknamed Pidge, who died in November 1994. The first of the eight movies aired that same month and was dedicated to him with these words: This picture is dedicated to the memory of Noah Beery, Jr. We love you and miss you, Pidge.”

Joe Santos has been married to his wife, Mary Montero, for nearly 60 years and they have two children.

James Garner was involved with many charitable causes and volunteered with Save the Children. 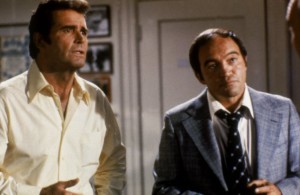 Noah Beery, Jr. was known for both films and television. His work includes The Best Little Whorehouse in Texas, Red River, Riverboat, Hondo, Magnum, P.I., Murder She Wrote, The Waltons and Wagons West.