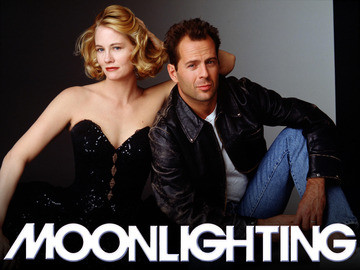 Maddie Hayes (Cybill Shepherd) is a former high-fashion model. She is smart, sexy and beautiful, but in dire financial straits after her accountant embezzled all her money. Left with a nothing but run-down detective agency, which she renamed Blue Moon Investigations (in homage to her days as a spokesmodel for the Blue Moon Shampoo Company), Maddie begins her new life.

David Addison (Bruce Willis) is the fast-talking, charming detective who, until recently, ran the detective agency. Maddie’s new partner, David is handsome, funny and irresistible. Despite their nonstop bickering and Maddie’s insistence that he’s not her type, David and Maddie have an undeniable chemistry and sexual tension between them.

Agnes DiPesto (Allyce Beasley) is the agency’s loyal and quirky receptionist. Known for rhyming when she answers the phone, Agnes is a good receptionist and a caring friend, with a penchant for meddling in people’s lives.

Herbert Viola (Curtis Armstrong) joins the agency later in the series. He rises the ranks quickly and forms a relationship with Agnes DiPesto.

MacGillicudy (Jack Blessing), an employee of the Blue Moon agency, competes with Herbert for Agnes’ affection. 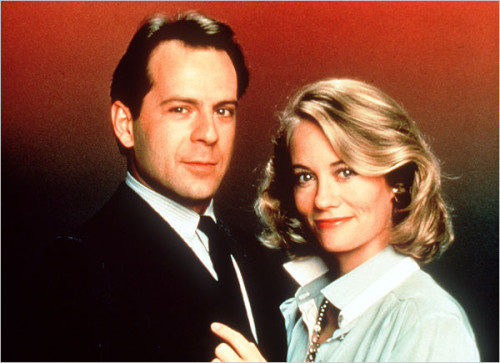 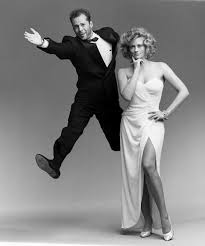 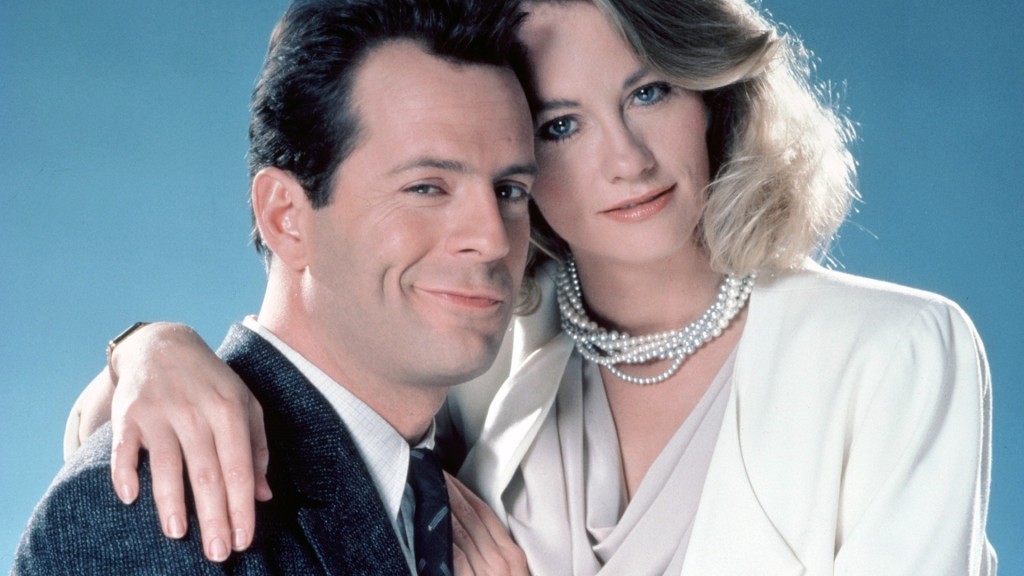 As a young man, Bruce Willis’s personality was similar to his character on Moonlighting, he was a troublemaker and often obnoxious.

Cybill Shepherd was named after her grandfather, Cy, and her father, Bill.

On TV Guide’s “100 Greatest Episodes of All Time,” the Moonlighting episode, “The Dream Sequence Always Rings Twice” was ranked 34. David Addison and Maddie Hayes also made the list as one of the “Best TV Couples of All Time.”

A supporter of gun rights, Bruce Willis once said, “Everyone has a right to bear arms. If you take guns away from legal gun owners, then the only people who have guns are the bad guys.”

Curtis Armstrong has been married for twenty years and has a daughter named Lily.

Memphis, Tennessee-born Cybill Shepherd won the “Miss Teenage Memphis” contest in 1966, at the age of sixteen and the “Model of the Year” contest in 1968.

Allyce Beasley has been married three times; she has one son.

Bruce Willis’ performance as John McClane in the Die Hard films is listed as number 46 on Premiere Magazine’s “100 Greatest Movie Characters of All Time.”

Bruce Willis is the ninth highest-grossing actor in lead roles and the twelfth highest in supporting roles.

Production delays were a common factor on this show. Ranging from the producer’s incredible attention to detail, to the two main co-stars’ various disagreements, the production delays were so extensive that ABC ridiculed them in an ad campaign that showed network executives impatiently waiting for new episodes.

Curtis Armstrong played the lovable (but somewhat disgusting) character Booger in Revenge of the Nerds. He claims to be recognized as Booger at least once a day.

Bruce Willis is very supportive of actors he meets on set and often requests they are later given supporting roles in his films. He worked with Michael Clarke Duncan on The Whole Nine Yards and later recommended him for Armageddon and The Green Mile. Willis appeared on the television series Friends after he and Matthew Perry met on the set of The Whole Nine Yards and Perry asked if he would come on the show. Willis was the first actor to film a guest spot on Friendsand win an Emmy Award in the category of Outstanding Guest Actor for his performance. 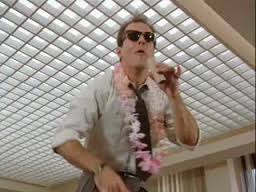 Cybill Shepherd was pregnant during her time on Moonlighting and gave birth to twins, Molly Ariel and Cyrus Zachariah. She also had a third child, a daughter named Clementine, in 1979.

Bruce Willis has been incredibly vocal in his support for most major Republican candidates in the past few decades, except for Bob Dole who criticized Demi Moore for her role in Striptease.

Moonlighting was nominated for both Best Comedy and Best Drama in the same year, a first for the Directors Guild of America.

Cybill Shepherd was discovered by famous director Peter Bogdanovich, who saw her picture on the cover of Glamour while standing in line at the supermarket. She and Bogdanovich later become lovers.

Bruce Willis was the voice of baby Mikey in the first two Look Who’s Talking movies.

Moonlighting was listed as one of Time magazine’s “100 Best TV Shows of All-Time” in 2007.

Following daughter Tallulah’s suggestion, Bruce Willis purchasing 12,000 boxes of Girl Scout Cookies and had them sent to troops in the Middle East and to sailors aboard the U.S.S. John F. Kennedy.

Bruce Willis is one of the founders of Planet Hollywood, along with Demi Moore, Sylvester Stallone and Arnold Schwarzenegger.

This series was well known for “breaking the fourth wall,” which is a method where the actors look directly at the camera, talk to the audience, and mention the network or producers.

Cybill Shepherd’s autobiography is entitled, Cybill Disobedience: How I Survived Beauty Pageants, Elvis, Sex, Bruce Willis, Lies, Marriage, Motherhood, Hollywood and the Irrepressible Urge To Say What I Think. In the book, she claims she dated and cared for Elvis Presley, but could not handle his dependence on drugs. She also claims to have turned down a date with Robert DeNiro; and that she and Bruce Willis almost became off-screen lovers off-screen but agreed that it would hurt the series.

Bruce Willis wears his watch upside down with the face touching his wrist. This can be seen in many of his films, unless he is specifically asked to flip it over.

Bruce Willis has been married twice and has five children, all girls. Two of his children are with his present wife; the others are with his former wife, actress Demi Moore.

Cybill Shepherd has been an outspoken activist for both abortion and gay rights. She also supports parental rights and same-sex marriage.

Jack Blessing has had more than 100 guest spots on some of television’s most popular shows, including China Beach, Roseanne, M*A*S*H Northern Exposure, The X-Files and NYPD Blue.

Both Shepherd and Willis sang musical numbers during the series.

Bruce Willis worked as a private investigator before becoming an actor.

Curtis Armstrong is also known for the line, “Sometimes, you just gotta say, WTF!” in the movie Risky Business with Tom Cruise.

Although the scripts of most one-hour television shows are around sixty pages, Moonlighting scripts were almost double that because of the fast talking and overlapping dialogue of the two main characters.

Bruce Willis once filled in as the last-minute host for David Letterman on a night when he was supposed to be the guest. Except for his time off heart surgery, this was Letterman’s first “sick day” in twenty years.

This series was one of the most expensive shows produced at that time because of the producer’s extreme attention to detail. Filming Moonlighting took twice as long and cost twice as much as other television shows because executive producer and creator Glenn Gordon Caron was a perfectionist. Caron had given a extensive control over the production because the series was one of only three shows that was owned and produced in-house by a broadcast network.

To promote his then wife’s new movie, Striptease, Bruce Willis appeared on the Late Show with David Letterman and delighted fans with a striptease of his own.

Cybill Shepherd was treated for a serious melanoma in 2002.

Many of the episodes feature shots of Maddie’s feet as she is walking from the elevator to her office because Caron needed more time to finish writing the scripts.

Jack Blessing has lent his voice to more than 3,000 movies and television shows.

In 2004, Bruce Willis sued Revolution Studios for a forehead injury he received during the making of Tears of the Sun. He claims he sustained the injury during “ultra hazardous activity” and it has caused him extreme physical, mental and emotional pain and suffering. The amount of damages is not specified.

Curtis Armstrong has been in many films and guest starred on several television shows, including Psyche, CSI: Crime Scene Investigation and House.

Bruce Willis attended the wedding of his former wife, Demi Moore, and Ashton Kutcher. Moore and Kutcher attended his wedding to Emma Heming.

Bruce Willis was one of very few Hollywood celebrities who publicly supported the war in Iraq. In 2003, while visiting the troops, he offered $1 million (of his own money) to anyone who could capture Saddam Hussein. After Hussein’s capture, however, military rules prevented troops from receiving the award. In 2005, it was rumored he also offered $1 million to anyone who turned in Osama Bin Laden, Ayman Al-Zawahiri or Abu Musab Al-Zarqawi, the alleged planners behind the attacks on 9/11, but he later clarified that this statement was only hypothetical.