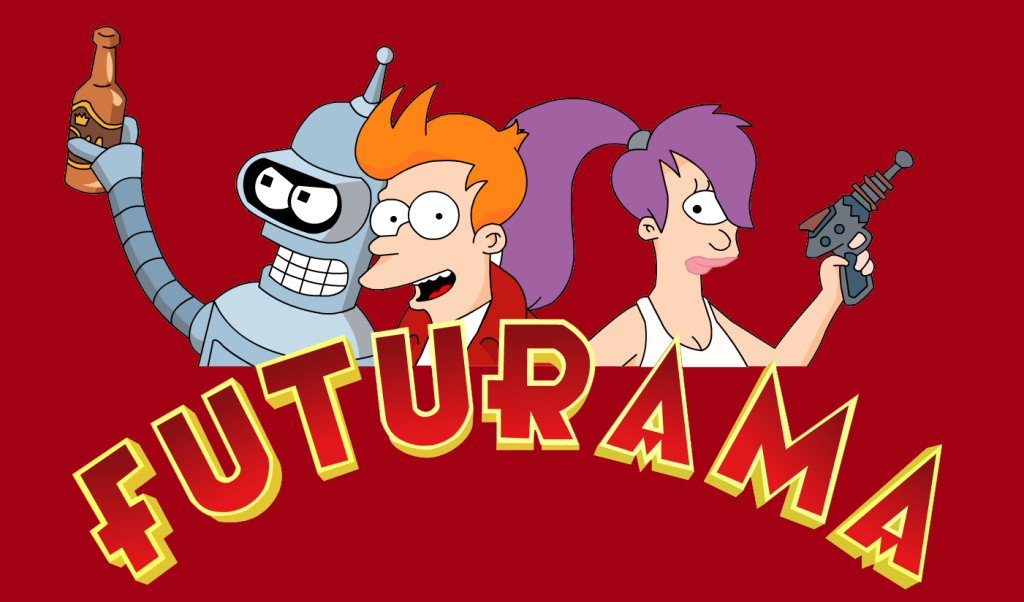 Animated adult science fiction series Futurama was created by Matt Groening, the man behind The Simpsons. It follows the adventures of Philip J. Fry, a late-20th century pizza delivery boy who lives in New York City and is inadvertently cryogenically frozen for a thousand years. Thawed out on New Year’s Eve, 2999, Philip manages to find work at Planet Express, a futuristic delivery service shipping packages to all five sections of the universe.

The New York of the 31st century has been built over the remains of “Old New York” and much of its architecture is similar to the Populuxe style. The problems of the future are exaggerated versions of those faced today – bureaucracy, global warming and substance abuse – and much as New York has become a more intense version of itself, so too have other locations on Earth.

Thanks to the technological advances of the last millennium, many of today’s celebrities and animals live on in the 31st century as heads in jars. The American inventor, Ron Popeil, was responsible for the jar technology and mysteriously the preserved heads include a number of historical figures who died before its invention. In an added twist, the heads seem to be the age the person was at the peak of their fame, rather than their age at death. As for the animals, the ones that remain from today live alongside extraterrestrial, mutated and cross-bred animals of the future.

But like the old saying goes, the more things change the more they stay the same… 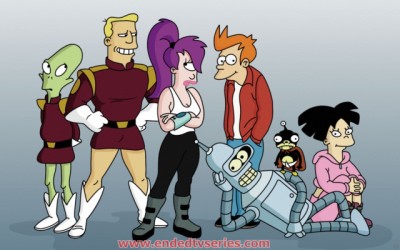 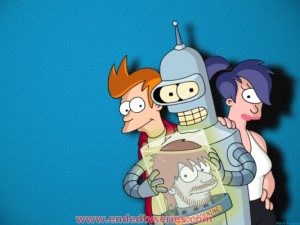 In addition to being an actress Katey Sagal (Turanga Leela) is also a singer and songwriter. She has released two albums, performed back-up for many well-known artists, and during the late 1970’s and early 80’s was one of Bette Midler’s “Harlettes” in her stage shows.

Matt Groening’s most famous creations on The Simpsons bear the names of members of his family: his parents were called Homer and Margaret and his sisters were Lisa and Maggie. Not wanting to risk offending other relatives by making them the namesake of a Simpsons character, he decided to leave Homer’s father without a name. The writers of the show decided to call him Abraham, oddly enough almost identical to Groening’s middle name of Abram. When Groening’s second son was born in 1991 he named him Abe.

One of Futurama’s running jokes is that owls have replaced rats and pigeons as pests.

Tom Kenny (Abner Doubledeal) is the voice of SpongeBob SquarePants.

Despite sharing a name, John DiMaggio is not related to famous baseball player Joe DiMaggio.

Matt Groening bought the rights to use the “30th Century Fox” logo after the Fox television network said Futurama shouldn’t use it. Shortly afterwards, Fox said that they loved it.

Billy West (Philip J. Fry) was also the voice of the character Stimpy on Ren & Stimpy.

Much like The Simpsons where certain elements of the introductory sequence are different in every episode, Futurama shows different text at the bottom of the screen and at the end of the theme song the ship crashes into something different at the beginning of each episode.

Maurice LaMarche handed a note to the secretary of the Dalai Lama during a flight. It said that he had been unable to let go of the anger he had carried with him for the seventeen years since the murder of his father, and asked for His Holiness’ help. LaMarche was ushered to the Dalai Lama’s seat and they talked for ten minutes in what LaMarche has since called a defining moment in his life.

The character of Professor Hubert J. Farnsworth was named after Philo T. Farnsworth, an inventor and one of the pioneers of television. His invention debuted at the 1939 New York World’s Fair, along with the Futurama exhibit/ride.

David Herman (Scruffy) was one of the original cast members of MADtv.

Tress MacNeille has voiced many of the female characters in The Simpsons.

The character of Philip J. Fry is a tribute to the actor Phil Hartman. Hartman was originally cast as the voice of Zapp Brannigan, a 25-Star General in the “Democratic Order of Planets” and captain of its flagship, the Nimbus. After Hartman’s death, Billy West took over the part. 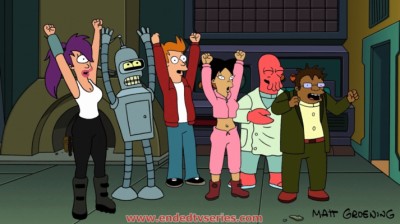 Katey Sagal is probably best known for her role as Peg Bundy in the popular Fox TV series Married…With Children.

Frank Welker (Nibbler) has provided the voice of Freddie Jones in every episode of Scooby-Doo ever made, as well as all the cameos and parodies of the character in different TV series. The only exception is the spin-off show A Pup Named Scooby-Doo.

Matt Groening admits that he named Bender the robot after the smart-mouthed character of John Bender in the movie The Breakfast Club. Robot Bender’s first words were “Bite my shiny metal ass”.

John DiMaggio (Bender) is one of only two actors to have played the same fictional character in both The Simpsons and Futurama.

The sound made by “Hypnotoad” is actually a recording of a turbine engine played backwards.

Billy West provides the voice for Red in the M&M candy commercials.

David X. Cohen, writer and producer of Futurama, is an avid Dungeons and Dragons player and there are many references to the game throughout the show. Its creator, E. Gary Gygax, has a cameo in one episode, and the third straight-to-DVD Futurama feature film, Futurama: Bender’s Game, is based largely on the game and is dedicated to the memory of Gygax, who died of an abdominal aortic aneurysm on March 4, 2008.

Katey Sagal is the only member of the cast to voice only one character.

Futurama debuted in 1999 and ran until 2003. It could be seen in reruns on Cartoon Network’s Adult Swim until 2007, when the network’s contract expired. In 2008, it was brought back by way of four direct-to-video films, the last of which was released early in 2009. Comedy Central then agreed to an arrangement with 20th Century Fox Television to syndicate the existing episodes, as well as to air the four films as a fifth season comprising sixteen 30-minute episodes. In 2009, Comedy Central picked up the show for a sixth season and it was later renewed for a seventh and final season. To the disappointment of many, its series finale aired on September 4, 2013. Matt Groening has, however, expressed his intention of finding another network to pick it up.

Futurama has remained incredibly popular and has spawned a host of merchandise including clothing, figurines, a tie-in to a comic book series, calendars and a video game.

Maurice LaMarche (Morbo) is the voice of Toucan Sam, the Froot Loops spokes-bird. He is also the voice of The Brain in the Emmy-winning Pinky and the Brain.

Several episodes of Futurama were worked on simultaneously, meaning that one episode took between 6 and 9 months to complete.

Like The Simpsons many of the Futurama episodes feature guest voices, ranging from entertainers of all kinds to a former vice president of the United States. Some voice supporting characters while others play themselves.

Phil LaMarr was one of the original cast members of MADtv.

Production studio Rough Draft Productions is responsible for Futurama’s animation. After receiving the script of an episode, they storyboard it into more than 100 drawings, after which a pencil-drawn animatic is created with 1,000 frames. Finally, Rough Drafts’s sister studio, located in South Korea, delivers the 30,000-frame finished episode. Rough Draft uses CGI alongside traditional cartoon drawings, especially for intricate or fast sequences such as the opening, the movement of a spaceship, nebulae, explosions or snow scenes.

Billy West’s father was an abusive alcoholic who, according to West, tried to kill him fifteen times.

The Simpsons’ 25th season finale serves as an official cross-over with Futurama. The episode is titled Simpsorama and aired several months after the apparent completion of Futurama.

Dawnn Lewis (LaBarbara Conrad) was one of the main characters on the Cosby spin-off A Different World and helped compose the theme song for the series along with Bill Cosby and Stu Gardner.  She also sang the song for the first season.

The large number of noises, character voices and vocal effects produced by Frank Welker for more than 90 films over the last 40 years has vaulted him into the number one position on the “All Time Top 100 Stars at the Box Office” list, ahead of such greats as Samuel L. Jackson, Eddie Murphy, Harrison Ford and Tom Hanks.

Katey Sagal had three children with her second husband, Jack White. One, a daughter, was sadly stillborn, while her other daughter and a son were born when she was 40 and 42 years of age respectively. After her third marriage to Kurt Sutter she had a fourth child, born via surrogate, at the age of 52.

David X. Cohen used his real name of David S. Cohen while working on The Simpsons. After starting work on Futurama, he decided to join the Writer’s Guild but another David S. Cohen had already registered with them and it was not possible to join with the same name as an existing member. He chose the letter X instead of S for his middle initial because he thought that it sounded more ‘sci-fi-ish’.