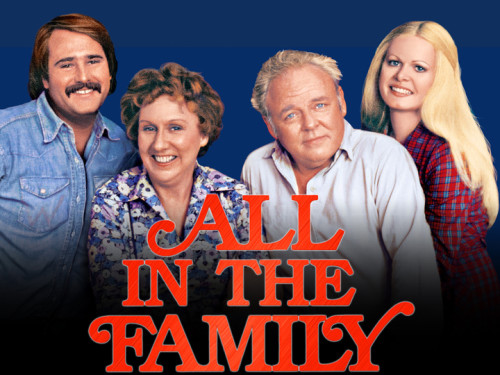 All in the Family follows the life of working-class World War II veteran Archie Bunker and his family in the middle-class neighborhood of Astoria in Queens, New York.

Archie Bunker (Carroll O’Connor) – Archie is a bigot, a blue-collar worker and veteran of World War II with a list of prejudices as long as your arm. Not born in the USA? African-American, Polish, Jewish or Catholic? Believe in equal rights for women? You’re not going to get along with Archie. But for all his flaws, Archie loves his family and tries to do his best for them.

Edith Bunker (Jean Stapleton) – Edith is Archie’s loyal wife. She and Archie have a daughter, Gloria, who lives with them together with her husband, Michael. Edith tends to be the buffer between Archie and the “children” and though she’s sometimes a little slow she has good instincts about people. She’s a ball of energy, dedicated to ensuring her family are never kept waiting for anything, and her shrill voice can frequently be heard calling “Ahchie” (or in early episodes “Awwwchie”). 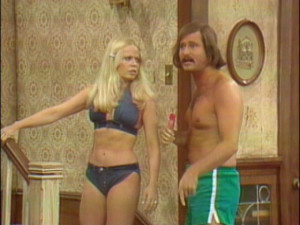 Gloria Stivic (Sally Struthers) – Gloria is Archie and Edith’s only child and the wife of liberal college student Michael Stivic. Diagnosed with anemia when she was young, Gloria led a sheltered childhood. When she meets and marries Michael her eyes are opened to another way of looking at the world, and she begins to side with her husband and his liberal views. Living in the same house as her parents, Gloria constantly finds herself in the middle of arguments between her father and husband. She and Michael eventually move next door, Gloria acting as sole breadwinner for the household despite having dropped out of high school at 16. She later has a son named Joey and becomes a stay-at-home mother.

Michael Stivic (Rob Reiner) – Michael is the liberal husband of Gloria and the son-in-law of Edith and Archie Bunker. A Polish-American from Chicago, he was orphaned when his parents were killed in a car accident and raised by his ex-Marine uncle, Casimir Stivic. He gets along with Edith and calls her “Ma”, but relations with his father-in-law are not so easy and he remains “Archie” or sometimes “Arch”. For his part, Archie refers to his son-in-law as “Meathead”. Michael is a humanitarian who wants to change the world for the better – but his high ideals sometimes give him a superior air and don’t stop him being something of a male chauvinist.

Stephanie Mills (Danielle Brisebois) – Stephanie is the grandniece of Edith and is taken in by the Bunkers after being abandoned on their doorstep by her alcoholic father. Archie, who had been looking forward to a quiet life after Gloria and Michael moved to California, is at first less than thrilled to be presented with another youngster to look after. Soon, though, he learns to love her like his own daughter. 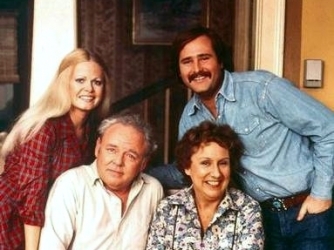 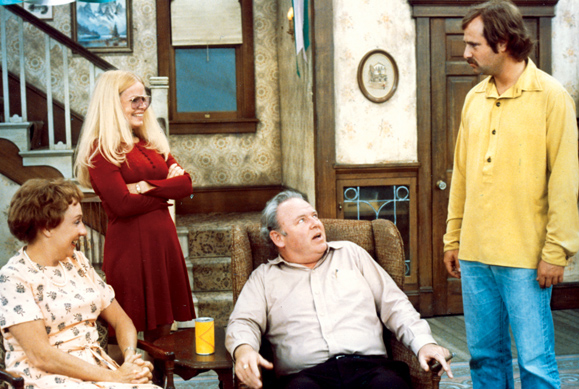 The part of Michael “Meathead” Stivic was originally offered to Harrison Ford. Ford, however, turned it down, finding the character of Archie Bunker too offensive.

In May 2013 Jean Stapleton (Edith Bunker) died of natural causes at the age of 90. On June 5 that year the lights on Broadway were dimmed at 8pm for one minute to honor her memory.

The episode of All in the Family entitled “Sammy’s Visit” was ranked #13 in TV Guide’s list of “100 Greatest Episodes of All Time”. The episode sees legendary actor Sammy Davis, Jr. playing himself and having to go to Archie’s house to pick up his briefcase. After Davis hears Archie making racist remarks he asks for a photograph with him. Just as the shutter clicks, Davis leans over and kisses Archie on the cheek. The audience laughter lasted for so long that the episode had to be drastically cut before it could be broadcast.

All in the Family was the first television show to be shot in front of a primetime audience. 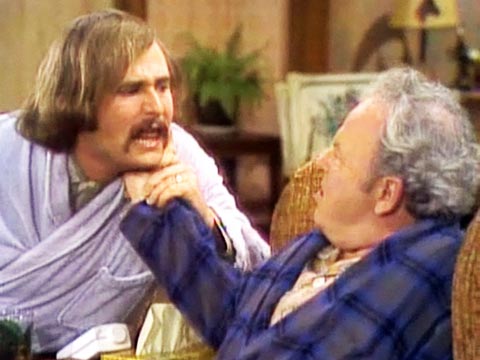 All in the Family was the first prime time television show to broadcast the sound of a toilet flushing.

The original easy chairs used by Archie and Edith Bunker in the series are now on display at the Smithsonian National Museum of American History. Although they had been purchased for the show from a Goodwill thrift store for hardly any money, it cost the producers several thousand dollars to re-create them after their donation to the Smithsonian.

Jean Stapleton and her husband, William Putch, were married for 26 years until his death in 1983. They had two children.

A liberal, Carroll O’ Connor’s personal views were the polar opposite of his character Archie Bunkers.

Carroll O’Connor died on the same day as blues legend John Lee Hooker. In a strange twist of fate, their stars on the Hollywood Walk of Fame are right beside each other.

Rob Reiner, who played Michael Stivic, began to experience rapid hair loss before the series started and wore a hairpiece from halfway through its first season. 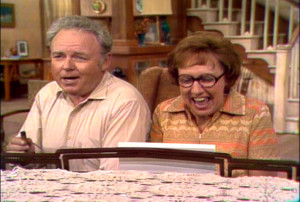 Jean Stapleton was offered the role of Jessica Fletcher in the series Murder She Wrote, but turned it down. The role went to Angela Lansbury.

Actress and director Penny Marshall was considered for the role of Gloria on All in the Family. At the time she was married to Rob Reiner, who played Gloria’s husband.

Due to low ratings, All in the Family was in danger of being cancelled after its first season but became a huge hit during a summer re-run in 1971. It was renewed by CBS for a second season and the rest is history.

All in the Family was the first television show to earn Emmys for every one of its main cast members.

The CBS pilot episode of All in the Family was not its first. ABC had earlier developed two other pilots, each with different actors playing the parts of Gloria and Michael.

Carroll O’Connor’s son Hugh, adopted by him and his wife Nancy when he was only six days old, tragically committed suicide in 1995, shooting himself whilst on the telephone with his father. He had battled drug addiction for many years. After his son’s death, O’Connor spent the rest of his life raising awareness about drug addiction. He lobbied the State of California to pass legislation allowing family members of an addict, or anyone else injured by the actions of a drug dealer, to sue for the costs of medical treatment and other damages. The law, the Drug Dealer Civil Liability Act, was passed in 1997 and is often referred to as the Hugh O’Connor Memorial Law.

Jean Stapleton received an honorary degree from Wilson College and had a scholarship named after her.

All in the Family was the first series to be shot on videotape rather than film.

All in the Family came fourth in TV Guide’s list of “50 Greatest TV Shows of All Time”.

Sally Struthers is only 5′ 1” tall, although she tended to wear heels while working on the show.

The character of Archie Bunker came in at #24 in TV Guide’s list of “50 Greatest TV Dads of All Time”. 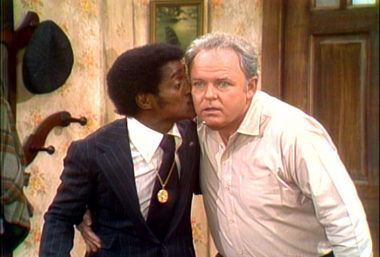 The series was set in a Queens neighborhood called Astoria. Carroll O’Connor, a native of Queens from Forest Hills, gave the writers lots of suggestions for locations they could use to make the setting more realistic.

Carroll O’Connor didn’t begin to act on television until he was 36 years old.

In 2006, Rob Reiner was mooted as a possible candidate to run against California Governor Arnold Schwarzenegger. He decided against it.

The idea to call Michael Stivic “Meathead” came from Norman Lear, whose father called him the nickname as a child.

Jean Stapleton was a women’s rights activist and liberal Democrat.

Danielle Brisebois is married and gave birth to twin daughters in December 2013.

Carroll O’Connor and his wife, Nancy, were married for a few weeks shy of 50 years. Sadly, O’Connor died of a heart attack on June 21, 2001. The couple’s 50th wedding anniversary would have been July 28.

All in the Family was the first television series to rank at #1 in the yearly Nielsen ratings for five years running. It was to be nearly a decade before the achievement was repeated by the NBC series The Cosby Show and has since been managed only once – by American Idol.

The exterior of the house shown in the opening credits is actually 89-70 Cooper Avenue in Glendale, Queens, New York. A set was used for the interior shots.

Sally Struthers played the role of Gloria Bunker Stivic in not one but three different television shows: All in the Family, Archie Bunker’s Place and Gloria.

Rob Reiner grew up living directly across the street from Penny Marshall’s house in the Bronx. Years later, Marshall became his first wife.