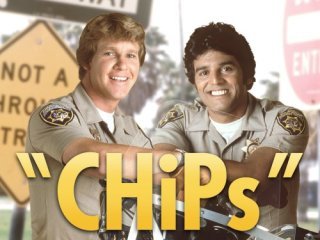 Officer Frank “Ponch” Poncherello (Erik Estrada) – At the beginning of the series Ponch, a broad-grinned Latino with an eye for the ladies and a way of finding trouble, is on probation. He needs a field training officer to ride with him and show him the ropes; enter Officer Jon Baker. The two become fast friends and spend most of their time together, whether at work or off. Ponch is constantly trying to impress the ladies, usually with his athletic ability or his skill at disco dancing.

Officer Jonathan Baker (Larry Wilcox) – Jon is a blond boy-next-door and Vietnam veteran who plays by the rules and always seems to be around to get his troublesome partner out of difficulty. Kind and funny, Jon is always ready with a smile. 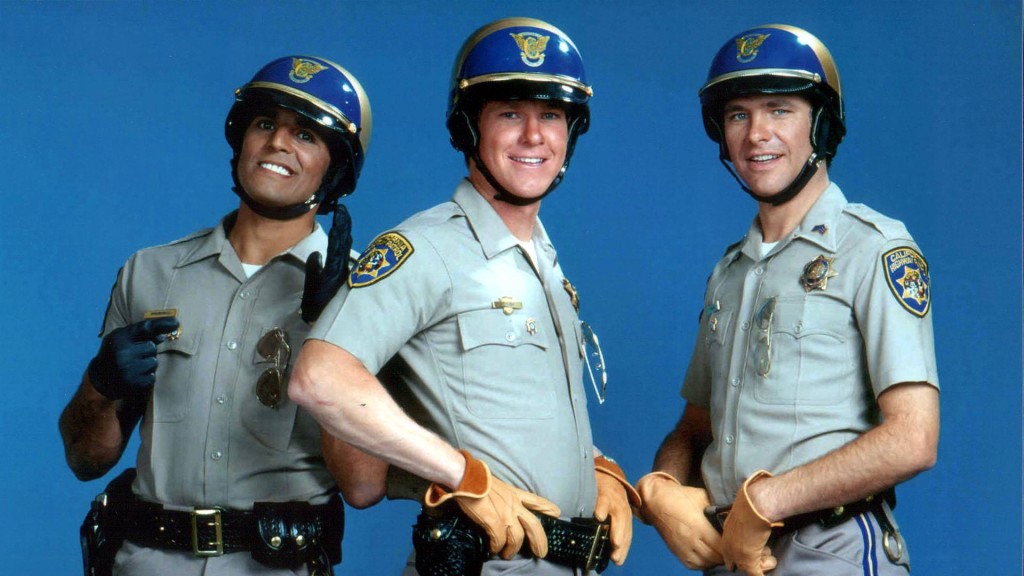 Sergeant Joseph Getraer (Robert Pine) – Sergeant Getraer is the commanding officer of the precinct. A happily married family man, he is brusque but kind and always has the best interests of his men at heart.

Officer Arthur Grossman (Paul Linke) – Known to almost everyone as “Grossie” or “Artie”, the mild-mannered Officer Grossman gets along with everyone – even Ponch, who has been known to pick on him now and then.

Officer Barry Baricza (Brodie Greer) – Brodie or “Bear” is a tall, kind officer with gentle eyes and sharp wits. He can always be counted on when any of his fellow officers need back up.

Officer Bonnie Clark (Randi Oakes) – Bonnie is one of the few female officers in the precinct but gets on well with the rest of the team. A capable officer, she is blonde, pretty and wholesome.

Harlan Arliss (Lou Wagner) – Harlan is the CHP’s dependable and down-to-earth mechanic, always on hand to keep the officers’ motorcycles and cars on the road. 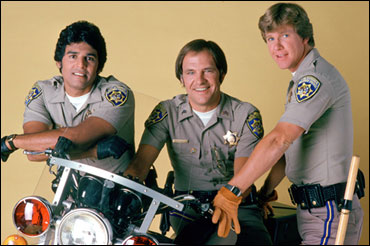 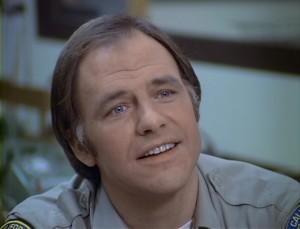 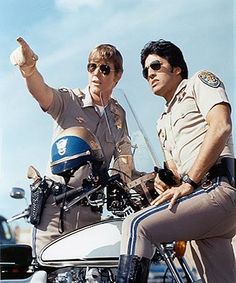 The creator of CHiPs, Rick Rosner, was a reserve deputy with the Los Angeles County Sherriff’s Department. He got the idea for the show when he saw two CHP officers on motorcycles whilst on a coffee break there. He also created the shows Emergency! and 240-Robert.

Larry Wilcox (Jon Baker) was one of four children. When his mother and father divorced his mother found it difficult to raise them on her own, and Larry grew up on his grandfather’s ranch in Rawlins, Wyoming.

The majority of the series was filmed in the San Fernando Valley of California. Any freeway crashes were shot on highways that had been recently constructed and were not yet open to the public. For a few shots of racing scenes, the Riverside International Raceway in Riverside, California was also used.

Erik Estrada (Frank Poncherello) is of Puerto Rican descent but does not speak Spanish.

Although stunt shots and doubles were used for some of the scenes, Erik Estrada and Larry Wilcox performed many smaller stunts themselves. Wilcox received hardly any injuries but Estrada was not so fortunate. He was injured multiple times over the years, from cuts and bruises to an accident during the third season that left him with broken wrists and several fractured ribs. His injuries were written into the storyline and he filmed some scenes from his hospital bed. Nearly 30 years later, it was disclosed that Estrada did not even have a motorcycle license while the series was in production. He had completed an intensive eight-week training course to learn how to ride and later qualified for a license at his third attempt. 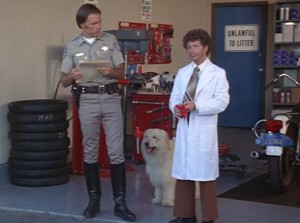 During the entire run of the show, neither Larry Wilcox nor Erik Estrada ever drew their guns. Officer Baricza (Brodie Greer) was the only officer to do so, and did it just three times.

Larry Wilcox and Erik Estrada had occasional differences of opinion behind the scenes and were not the best of friends while the series was being filmed. More recently, however, their relationship seems to have thawed and they now keep in touch with one another.

Randi Oakes (Bonnie Clark) has been married to actor Gregory Harrison for nearly 34 years and they have four children together.

There were several cast changes as the series progressed. A dispute over syndication profits saw Estrada go on strike in the fifth season and he did not appear in seven episodes, being replaced with actor Bruce (now Caitlyn) Jenner. Larry Wilcox was not seen at all in the last season, having fallen out with producers over what he saw as their ongoing favoritism towards Estrada. Wilcox was replaced by Tom Reilly as Officer Bobby Nelson. The 1981 and 1982 Speedway World Champion, Bruce Penhall, also occasionally took over for Wilcox as Officer Bruce Nelson, Bobby’s younger brother. By the end of the season Reilly too was rarely seen, as Estrada was not happy with his work ethic, not to mention his arrest during a traffic stop for possession of controlled substances. 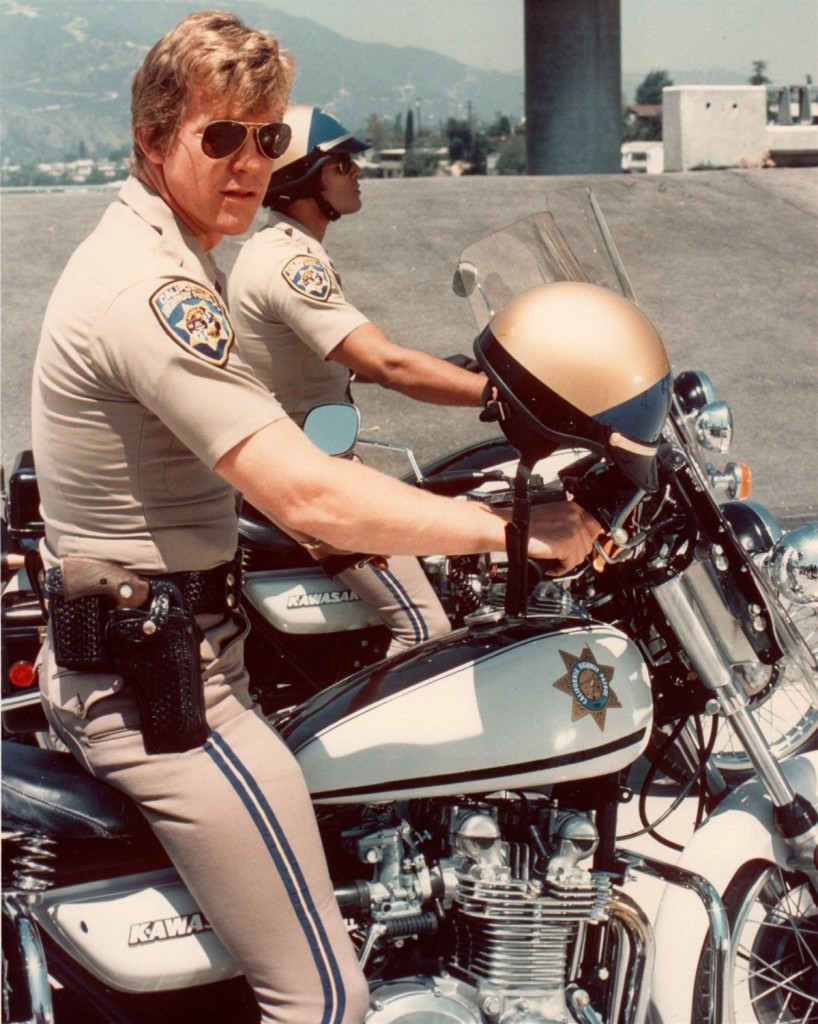 Paul Linke (Arthur Grossman) has been married twice. His first wife, Francesca Cagiati Draper, with whom he had three children, died of cancer in 1986. Linke directed his grief towards writing and performing a one man play called Time Flies When You’re Alive, which received excellent reviews.

In 1979, Erik Estrada was featured on the cover of People Magazine as one of “The 10 Sexiest Bachelors in the World”.

After leaving CHiPs Larry Wilcox began his own production company called Wilcox Productions, which is still in business today. He is also an honorary member of the real California Highway Patrol.

At the height of CHiPs’ popularity, Imperial Toys issued six die cast model vehicles from the series and Mego released a number of action figures of its characters. Unfortunately, the Mego figures haven’t aged well, with a large number of them having started to decompose or discolor. 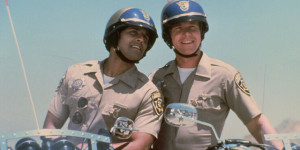 A made-for-television movie, Chips ’99, was released in October 1998. It included appearances from various members of the original cast, including Larry Wilcox, Erik Estrada and Robert Pine. In September 2014 Warner Bros. announced a film adaptation of the show, which would star actor Dax Shepard as Officer Jon Baker and Michael Pena as Officer Frank Poncherello.

Erik Estrada speaks for the C.H.P. 11-99 Foundation, a non-profit organization that provides benefits and scholarships to family members of the California Highway Patrol and funeral expenses for fallen officers.

Randi Oakes won the Miss Iowa Model of the Year contest when she was 17. She won a modeling contract and moved to New York immediately afterwards.

The character of Jon Baker was one of the first characters on a television series to be identified as a veteran of the Vietnam War, and it was particularly unusual that this was depicted in a positive light. Larry Wilcox himself served in the Vietnam War for over a year as a Marine, and was an artilleryman during the Tet Offensive.

Erik Estrada went through training at the CHP Academy to see what being an officer there was really like.

Paul Linke was good friends with actor John Ritter and spoke at his memorial service. 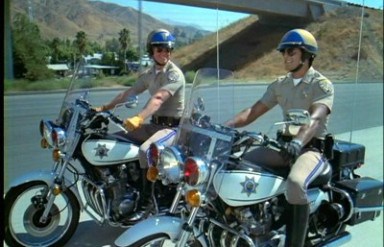 Robert Pine’s son, actor Chris Pine, took the role of Captain Kirk in the 2009 Star Trek film and its sequels, following in the steps of the original Kirk, William Shatner. Shortly after Chris got the part his father and William Shatner found themselves in front of the cameras together, making commercials for Priceline.com.

Randi Oakes was in a relationship with football player Joe Namath for seven years.

Larry Wilcox’s only sister, Sharon, was murdered by her husband at the age of only 23 in front of her three children and her mother. Unbelievably, her husband was acquitted but later killed himself.

Erik Estrada came in at #1 on TV Guide’s list of “25 Sexiest Men in Uniform”.

Two real-life CHP officers were injured in October of 1981 while on duty. The CHiPs cast went and donated blood, but one of the officers sadly died.

Robert Pine who played Sgt. Getraer was the only member of the entire cast who appeared in every single episode of the series.

Larry Wilcox was sentenced to three years on probation in Ft. Lauderdale, Florida in January of 2011, for conspiring to commit securities fraud. He pleaded guilty and made this statement before the court, “I betrayed my core values with what I did. I am deeply sorry.” 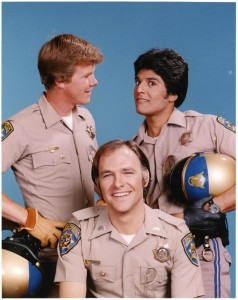 Erik Estrada has been married three times and has three children.

Randi Oakes retired from acting in 1985 after she gave birth to her first child.

Erik Estrada’s autobiography Erik Estrada: My Road from Harlem to Hollywood was published in 1997.

Larry Wilcox has set up an NPO Hub website that helps benefit police officers who have been killed in the line of duty.