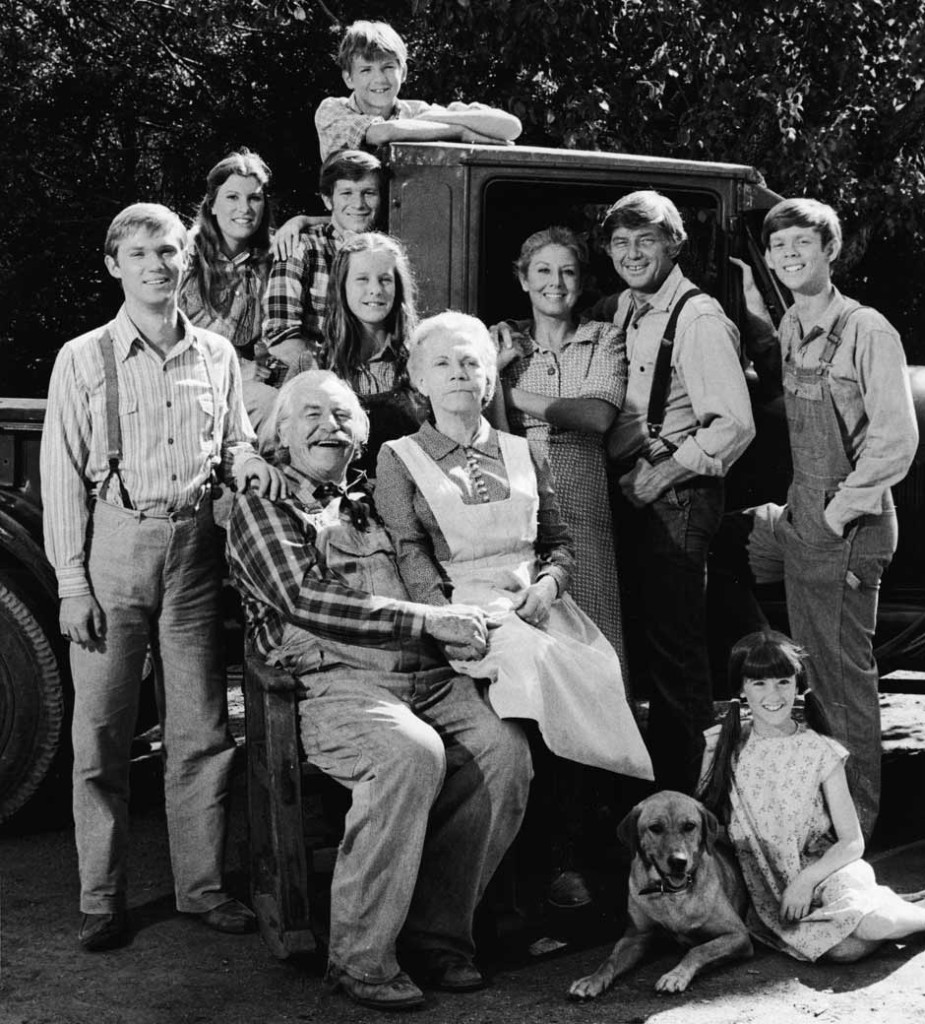 The show is set at the time of the Great Depression and World War II and centers on the lives of the Walton family. It was created by Earl Hamner, Jr. and based on his book Spencer’s Mountain and a 1963 movie of the same name, which starred Henry Fonda and Maureen O’Hara.

John Walton, Jr., better known to everyone as John-Boy (Richard Thomas), lives with his family in a town called Walton’s Mountain at the foot of a mountain in Jefferson County, Virginia. The family home is large and noisy: John-Boy lives with his mother and father, John (Ralph Waite) and Olivia (Michael Learned) Walton, his grandparents, Zebulon “Zeb” (Will Geer) and Esther (Ellen Corby) Walton, and his seven siblings. At seventeen years old, he is the oldest of the children and an aspiring novelist. The older John-Boy (voiced by series creator, Earl Hamner, Jr) narrates the beginning and end of every episode and the family’s story is told through his eyes. 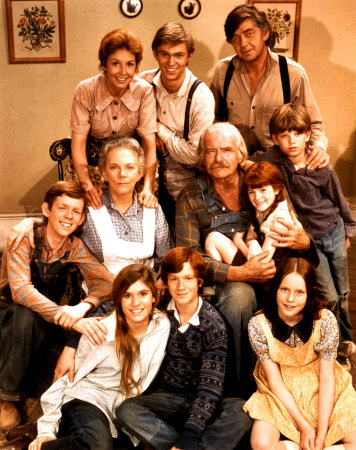 John Sr. earns a living by running a lumber mill, where his sons help out as they grow older. The family also farm on a small scale to enhance their income, and now and then take a trip into the woods to hunt for meat for their table. On occasion strangers or relatives drop by, and the family generously shares what hospitality they can. The small town in which they live is named after their property and filled with people with more or less money, doing what they can to get by.

Nearly every episode concludes with the familiar scene of the family home in darkness but for one or two small lights in an upstairs bedroom. Several characters reflect briefly on the recent events, bid each other goodnight, and turn out the lights. 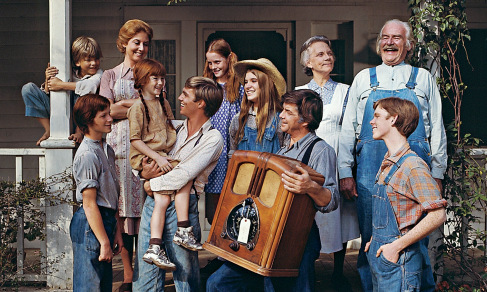 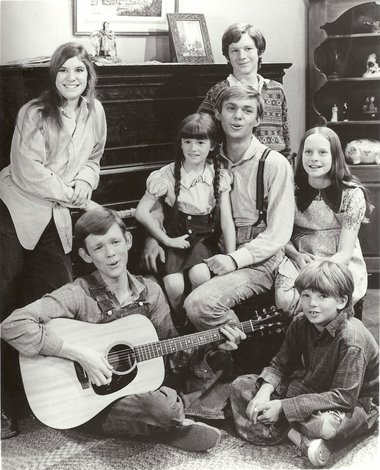 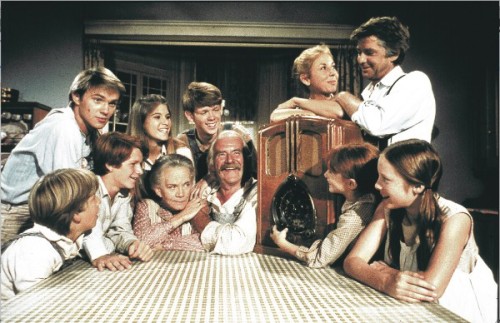 Ralph Waite (John Walton, Sr.) did not begin to study acting until he was 30 years old. By then he had earned a BA from Bucknell University, spent three years at the Yale School of Divinity and tried out countless other occupations.

The creator of the series and the book on which it was based, Earl Hamner, Jr., drew on his own siblings and other relatives in developing the characters. He also provided the voice of the elder John-Boy, who narrated The Waltons.

Will Geer (Zebulon Walton) had a master’s degree in botany from Chicago University.

Joe Conley (Ike Godsey) played many small roles over several decades, but is best remembered as Ike Godsey, the storekeeper in The Waltons. 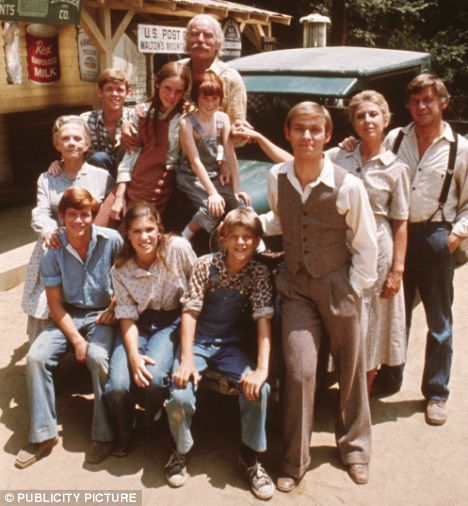 Richard Thomas (John-Boy Walton) has 50 per cent hearing loss resulting from a nerve disorder called otosclerosis and uses two very small hearing aids. He is the National Chairman of the Better Hearing Institute.

In 1986, Judy Norton took part in two world-records in skydiving.

Michael Learned (Olivia Walton) is the oldest of six children (all girls) and the daughter of a U.S. State Department employee. The family moved to Austria when she was only 11 years old, and she then attended boarding school in England.

In the television pilot movie that preceded the series, Grandpa Walton was played by Edgar Bergen. In the series itself the character was played by Will Geer but in the very first episode Bergen’s contribution was acknowledged in a scene where the entire family is shown sitting around their new radio, listening to the Edgar Bergen and Charlie McCarthy Show.

Eric Scott (Ben Walton) has been married three times. His second wife, Theresa Fargo died in 1992 of myelomonocytic leukemia, which she developed during her pregnancy with their daughter, Ashley. She died shortly after their daughter was born. 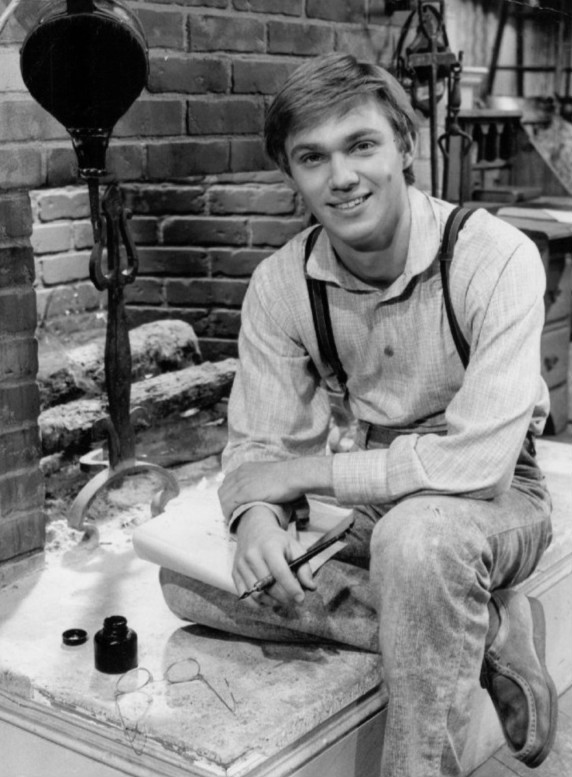 In addition to writing Spencer’s Mountain and other novels, Earl Hamner, Jr. (narrator) created not only The Waltons but the television series Boone and Apple’s Way. He has also worked as a producer and written teleplays and screenplays for, amongst others, Charlotte’s Web (1973 and 2006), Falcon Crest, The Twilight Zone and Heidi.

Will Geer was married to actress Herta Ware for twenty years and they had three children together. Although they eventually divorced, they remained close for the rest of their lives. Before his marriage, Geer was the lover of gay activist, Harry Hay.

David W. Harper (Jim-Bob Walton) appeared on screen a few times after The Waltons ended, including the movie Fletch, with Chevy Chase. Shortly afterwards, however, he dropped out of view.

Jon Walmsley (Jason Walton) is an accomplished multi-instrumentalist, a world-class guitarist and vocalist, and has worked with talented musicians including Richard Marx, Merle Haggard, The Doobie Brothers and Gregg Allman.

Judy Norton (Mary Ellen Walton) posed naked for the August 1985 issue of Playboy magazine. She said her aim was to shake up her image after her many years on The Waltons.

Kami Cotler (Elizabeth Walton) is married to Kim Howard and they have two children.

Ralph Waite was passionate about politics and desired for many years to hold political office. Despite three attempts to run for a Congressional seat (once in 1990 and twice in 1998 due to the death of Sonny Bono), he was ultimately unsuccessful. 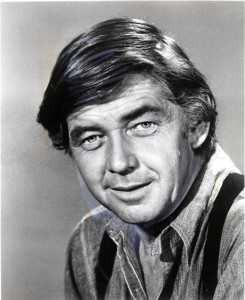 Will Geer became a member of the Communist Party of the United States in 1934. He toured work camps in the 1930’s with folk singers such as Woody Guthrie and Burl Ives, and was a dedicated activist. However, in the early 1950’s, Geer was blacklisted for refusing to testify before the House Committee on Un-American Activities and as a result he appeared in few films over the next decade.

Richard Thomas has been married twice and has five children. Three of them, all girls, are triplets.

The building that was the Walton House was located in the northern part of what is commonly referred to as the Jungle section of the Warner Bros. studios in Burbank. Walton’s Mountain, usually seen from the front porch of the home, was in reality a slope of the Hollywood Hills in California. The interior shots of the house were filmed on Stage 26, and the roadway to the home went through what remained of the Jungle area. As of 2003, the roadway still existed and could be seen during the studio tour; however Ike Godsey’s store had been removed long before. The house was dismantled and then rebuilt on the Ranch lot at the Warner Bros. studio located at Hollywood Way and Verdugo Avenue, and it is now used as a working exterior set. In the first season of Gilmore Girls, the “Dragonfly Inn” that Sookie and Lorelai buy and renovate, is actually the exterior of the old Walton House.

Joe Conley ran his own real-estate agencies and became very wealthy as a result.

Michael Learned is the winner of four Best Actress Emmy Awards, three for The Waltons and one for the series Nurse.

The character of John Walton, Sr. was ranked #3 in TV Guide’s list of the “50 Greatest TV Dads of All Time”.

Ralph Waite was married three times and had three daughters with his first wife, Beverly Hall. His oldest daughter, Sharon Waite, died of leukemia at only nine years of age.

Richard Thomas left the series after the fifth season because he had only signed a five-year contract.

Actor Will Geer, who played Grandpa Walton on the show, died after filming was over for the 1977-1978 season. He was written off the show by his character dying as well.

Will Geer and his wife founded the “Will Geer Theatricum Botanicum” in California in 1951, allowing him to combine his love of acting and botany. He made certain that every single plant mentioned in the works of Shakespeare was grown at the Theatricum.

Although actress Patricia Neal was originally given the part of Olivia Walton in the series pilot movie, The Waltons: The Homecoming: A Christmas Story, she was unable to continue playing the role as a result of health issues. It was then given to Michael Learned. 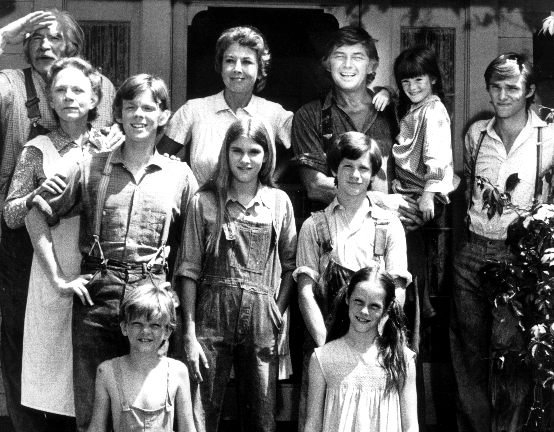 Ellen Corby, who played Grandma Walton, had to leave the series for a while after suffering a massive stroke. She later returned and her character had a stroke too, allowing Corby to undertake the challenges of recovery as part of the story.

Michael Learned has been married four times and has three children. She married her first husband when she was only 17 years old.

Richard Thomas made commercials for the restaurant chain Zaxby’s in 2008.

Kami Cotler is the principal at a charter school in Los Angeles, California.

Judy Norton and her ex-husband, Randy Apostle, ran a chain of dinner theatres in Canadian cities called “Celebrations and Jubilations”.

Ralph Waite returned to organized religion in 2010 after an absence of 50 years, becoming a member of the Spirit of the Desert Presbyterian Fellowship.

Jon Walmsley was the guitarist for musician Richard Marx in the late 1980’s.

Will Geer won an Emmy in 1975 for “Outstanding Supporting Actor in a Drama Series” for his portrayal of Grandpa Walton.

While trying to get the series ready to be filmed, the former executive of CBS decided he wanted a big star to appear in the show. He suggested Henry Fonda play the role of the father, so the network screened the pilot movie to Fonda. (Fonda had played the role of the patriarch in the big-screen film version, Spencer’s Mountain in 1963.) According to executive producer, Lee Rich, after watching the pilot movie, Fonda said, “What do you want me for? The kid is the star! The whole family is the star! You don’t need me.”

Mary Beth McDonough has one child, a daughter named Sydnee.

The series ran for nine seasons before being cancelled by CBS in 1981. The following year, NBC aired three television movie sequels, and then three more during the 1990’s.

When the series was first put on the CBS schedule in the fall of 1972, it was thought to have been a response to recent Congressional hearings on the quality of television. There was also speculation that it represented a backlash from a decision the previous year to eliminate a lot of the more rural type of shows from the network’s line-up. Several long-running rural shows which had still been getting good weekly ratings had recently been cancelled, including The Beverly Hillbillies and Green Acres. They even gave The Waltons a time slot between two very popular series, The Mod Squad and The Flip Wilson Show, the rumor being that the network didn’t think it would make it up against the other two. Ralph Waite, who played the father, said that he was hesitant to try out for the part as he did not want to be tied down to a long-running TV series. It was his agent who convinced him to audition by saying, “It will never sell. You do the pilot. You pick up a couple of bucks and then you go back to New York.” 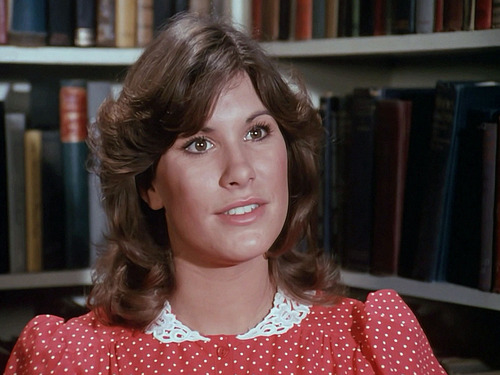 Earl Hamner, Jr. and his wife, Jane Martin, have been married for sixty years and had two children.

Judy Norton is a scientologist.

When Michael Learned was billed on the show it was as “Miss Michael Learned” because the producers did not want viewers to be confused about her gender. By the sixth season, the “Miss” was dropped. Learned says her parents never explained the reason behind her masculine name.

Ellen Corby died in 1987 at the Motion Picture and Television Country House and Hospital in California.

Ronnie Claire Edwards has vast repertory experience and her memoir, The Knife-Thrower’s Assistant, has recently been published.