Carrie Bradshaw (Sarah Jessica Parker) writes a column for the New York Star called “Sex and the City.” Carrie narrates the show, weaving in elements from her column, which is inspired by the adventures her girlfriends. Carrie is a single, young and attractive woman with a shopping problem and designer shoe addiction.

Samantha Jones (Kim Cattrall) is the oldest of the group. She is beautiful, intelligent and very confident—both in and outside of the bedroom. The owner of a public relations firm, Samantha is outspoken and blunt, but cares deeply for her friends. She loves sex and doesn’t believe in monogamy. Samantha refers to herself as “tri-sexual” because she will “try anything once.”

Charlotte York (Kristin Davis) is more traditional than her friends and longs to find her “happily ever after” — love, marriage and children. Beautiful, preppy and a true romantic, Charlotte is also the most privileged of the group. She grew up in Connecticut, went to Smith College, and was always very popular.

Miranda Hobbes (Cynthia Nixon) is the cynic of the group. With fiery red hair that matches her fierce temper, Miranda is a career-minded lawyer who graduated from Harvard. Miranda prioritizes work over her love life but softens her demeanor and becomes more trusting of men throughout the series. She is Carrie’s best friend and voice of reason.

John James Preston (Chris Noth) is the love of Carrie’s life. Known as “Mr. Big” or “Big,” he is a handsome, charming and slightly arrogant financier. He and Carrie fall for each other after a passing encounter in the street and, despite other relationships and countless hiccups, remain attracted to each other throughout the series.

Stanford Blatch (Willie Garson) is Carrie’s short and bald gay friend who is perpetually searching for the man of his dreams. Kind, sweet and caring, Stanford is always there when the girls need to talk, vent or cry.

Steve Brady (David Eigenberg), a bartender, is Miranda’s main love interest and the father of her son. Though he is loving and sweet, Miranda cannot get past Steve’s lack of career ambition.

Trey MacDougal (Kyle MacLachlan) is a Scottish-American cardiologist with blue blood, money and a Park Avenue residence. Handsome and respectable, Charlotte’s first husband isn’t without his downfalls, including sexual dysfunction and an overbearing mother.

Harry Goldenblatt (Evan Handler) is Charlotte’s divorce lawyer turned lover and eventual second husband. Short, bald and Jewish, Charlotte is initially repulsed by Harry until they sleep together. She soon realizes he’s not only the best sex she’s ever had, but also warm and generous.

Aidan Shaw (John Corbett) is Carrie’s other primary love interest. The opposite of Big, Aidan is kind, laid back and attentive, and wants to marry Carrie.

This series is based on a book called Sex in the City by Candace Bushnell.

Sarah Jessica Parker and husband Matthew Broderick have a second home in Ireland.

Beginning at age 12, David Eigenberg worked every summer to save money for college; he was kicked out within five weeks.

Evan Handler was diagnosed with acute myeloid leukemia in his twenties. In the hospital, a chaplain performed an ancient Jewish ritual on him, changing his name to “Chaim” to fool the “Angel of Death.” He later wrote a book called Time on Fire: My Comedy of Terrors, describing his experiences as a leukemia patient.

John Corbett was a series regular on the show Northern Exposure.

While competing on Celebrity Poker Showdown, Willie Garson won his round of Texas hold’em and earned the nickname “Evil Willie” for his fierce card playing.

Two films were made following the series finale of Sex and the City. 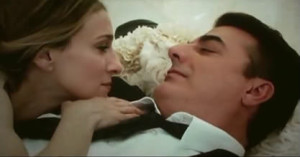 Kyle MacLachlan turned down the role Charlie Sheen played in the Platoon.

Kim Cattrall is fluent in German but admitted to forgetting some of the language.

Following the attack on the World Trade Center in 2001 (after episode 12 in season four), the Twin Towers were replaced by the Empire State Building in the opening credits.

Kristin Davis is a recovering alcoholic; she became sober at age 22.

After his cancer diagnosis, Evan Handler dropped out of the Broadway production of Biloxi Blues. He was the understudy for Sarah Jessica Parker’s husband Matthew Broderick.

Time magazine listed Sex in the City as one of its “100 Best TV Shows” of all time.

David Eigenberg is a former marine.

John Corbett was the only lead in the popular movie My Big Fat Greek Wedding to turn down the television spinoff.

While attending Barnard College, Cynthia Nixon made theatrical history by appearing in two hit Broadway plays at the same time, both directed by Mike Nichols. The Real Thing and Hurlyburly were playing just blocks apart, which allowed Nixon (whose parts were short) to run from one play to the next.

Kim Cattrall turned down the role of Samantha Jones twice before Darren Star’s boyfriend convinced her to shoot the pilot.

With the exception of Carrie, all of the women move into different apartments during the show.

Kyle MacLachlan maintains a website called mookieandsam.com for his family’s two dogs, who also have their own YouTube series.

Until the last season, Kristin Davis was the only main actress that hadn’t been nominated for an Emmy.

Cynthia Nixon was in a fifteen-year relationship with teacher/photographer, Danny Mozes. They had two children. In 2004, Nixon began dating Christine Marinoni, whom she eventually married in 2012. Nixon identifies as bisexual.

Though she wears very expensive footwear, the ballerina outfit Carrie wears in the opening credits was purchased for only five dollars from a vintage shop.

Kim Cattrall and her third husband, Mark Levinson, co-wrote the book, Satisfaction: The Art of the Female Orgasm in 2002.

More than 15 years before Sex in the City aired, Sarah Jessica Parker and Cynthia Nixon starred together in My Body, My Child.

John Corbett lives in Santa Barbara, California with girlfriend, Bo Derek, whom he met on a blind date.

Season five was much shorter than the rest of the series because Sarah Jessica Parker was pregnant. She was six months pregnant when filming for the season ended.

Cynthia Nixon was the only supporting character on the show to win an Emmy award.

Kim Cattrall and Sarah Jessica Parker despised each other from the first season onward, however both thought it was unprofessional to bash each other during the run of the show.

Evan Handler wrote a second book called It’s Only Temporary: The Good News and the Bad News of Being Alive.

In 2007 Kim Cattrall revealed she was booked on Pan Am Flight 103, the plane that crashed in Lockerbie, Scotland in 1988 when a bomb was detonated during the flight. She cancelled her flight at the last moment to finish Christmas shopping in London.

In 2009, Sarah Jessica Parker and Matthew Broderick had twin daughters, Marion Loretta Elwell and Tabitha Hodge, who were delivered via surrogate.

Kristin Davis won the Humane Society’s 2010 “Wyler Award,” after taking an abandoned baby elephant to a wildlife rehabilitation center in Africa. A lifelong animal lover, she also brought attention to the predicament of orphaned African elephants. 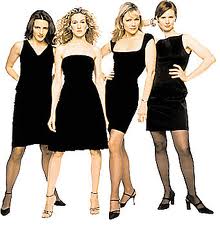 Kyle MacLachlan owns a winery in Washington State that he named “Pursued by Bear” after Fred Savage’s suggested the name over dinner. After MacLachlan’s son Callum was born in 2008, he created a new vintage called, “Baby Bear.”

Cynthia Nixon is one of only 15 performers to have won a Grammy, a Tony and an Emmy award. If she wins an Oscar, she will accomplish “the awards slam,” a feat achieved by only eight people.

Sarah Jessica Parker, who is one of eight children, grew up sharing clothing and owning only one or two pairs of shoes per year. Because of this, she developed a shoe fetish that is shared by her Sex and the City character. Also similar to her character in the 2008 Sex and the City movie, Parker has a closet at home dedicated to just shoes.

Chris Noth is co-owner of a music venue in New York City called “The Cutting Room.” He met his wife, Tara Lynn Wilson, while she was working there, and the two married in 2012.

Sarah Jessica Parker launched her own perfume, “Lovely,” in 2005 and released a second fragrance, “Covet,” in 2007. Those fragrances were followed by the release of “Covet Pure Bloom,” “Dawn”, “Endless,” “Twilight” and “SJP NYC,” as well as a clothing line, “Biten.”